Is it counter-productive of the Federal Reserve to lower the IOER? Or is the central bank beginning to lose or has already lost control over the short-term yield curve?

Over the last few weeks, the Effective Fed Funds Rate (EFF, or EFFR) has been trading above the IOER (which stands for Interest On Excess Reserves).

Banks experience an ebb-and-flow of deposits and withdrawals and asset valuation fluctuations which affect their balance sheet on a day-to-day basis. Banks know more or less what will happen from day-to-day with respect to deposits & withdrawals, thanks to sophisticated models based on statistics. But they can still be in need of some extra liquidity overnight to remain solvent, because averages are just that; averages. Deviations do occur all the time. A bank with extra liquidity a particular day, can then lend this liquidity to a competitor bank in need of that extra liquidity, and earn some interest on it.

In other words, banks borrow and lend money from each other to earn interest or remain solvent, depending on the particular need of the day.

Since no bank is immune to suffering a liquidity shortfall, it is in the banks’ mutual interest to help each other out (for a fee, of course) within reasonable parameters and help resolve overnight liquidity shortfalls in between themselves. The Federal Reserve is there as a so-called “lender of last resort” to lend money to a bank (through the so-called Discount Window) which cannot borrow from the other private banks.

It is the “within reasonable parameters”-device which is quite malleable, especially as fears mount in the banking system. The reason for this is that banks trying to borrow from other banks in the overnight market post collateral to do so. And if the lending bank doesn’t like the posted collateral, they will usually either demand more collateral be posted, or demand a higher interest rate for lending against said collateral, or, if things are really bad in the banking system and liquidity concerns abound, they will refuse altogether to lend against the posted collateral, which could then force the bank in need of liquidity to go the Federal Reserve and borrow from the Discount Window. This happened during the GFC of 2008-2009, and persisted for some years thereafter.

So, the recent increase in the Effective Fed Funds Rate, which has risen above the IOER means that one or more financial institutions out there in need of short-term loans, have to pay more than what the Federal Reserve pays, to get those loans and remain solvent. In other words, their fellow banks have begun to raise eyebrows over the quality of their posted collateral, on a big enough scale to push the EFF above the IOER.

That some banks are forced to pay a higher interest rate for overnight lending is not a new development, however. The 99th percentile of the Effective Funds Rate data is often quite a few basis points above the aggregate EFF and the IOER. What is new in this recent development, is that the sum total of the overnight loans have been made at rates high enough to cause the aggregate, that is, the daily EFF, to deviate from the IOER.

One might ask, “Why wouldn’t banks normally have to pay more to get loans from banks who could otherwise park their money with the relatively safer Federal Reserve and get paid that way?”. That’s a good question, with two answers to it.

And it is the second answer which brings forward why the recent development where the EFF has risen above the IOER is so significant. Banks have gone from on aggregate helping each other out with liquidity at the IOER rate, to increasingly distrusting the collateral posted by one or more institutions and demanding more money for lending against this “suspect collateral”, thus causing the EFF to rise above the IOER. 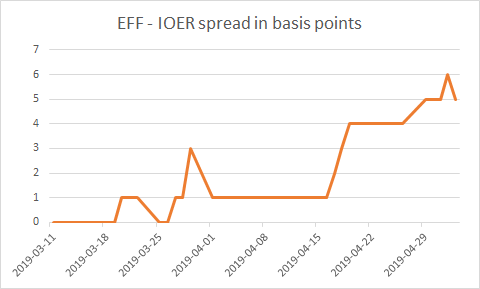 The above chart shows how the EFF-IOER spread has crept up from zero since March 2019.

One might ask another question in response to the above, namely, “If the banks are indeed mistrusting the quality of collateral enough to push the aggregate EFF higher than the IOER, why lend against this collateral at all instead of going to the safety of the Federal Reserve?”. The reason is probably a combination of factors, one factor being that things aren’t bad enough yet and that a few extra basis points of payment above the IOER is deemed sufficient to mitigate the perceived extra risk, and the second factor being that things aren’t yet bad enough to cause banks to (albeit unwillingly) aggravate the situation further by not lending at all. Remember, the banks are to high degrees intertwined, and forcing a fellow institution to go the Federal Reserve Discount Window instead of the interbank market, will bring scrutiny upon not just one bank, but rather, the entire banking sector. Hence, for now, banks still play largely nice with each other, for just a slightly higher fee than usual.

Secondarily, banks also have an expected cashflow at any given time which is tied not only to the ebb-and-flow of deposits and withdrawals mentioned previously, but also to interest the bank expects from its assets. And the Federal Reserve just impaired a part of the “guaranteed” cashflow the banks could earn from parking excess reserves and/or lending to the other banks, by lowering the IOER.

While the impairment may seem small, it will to some degree constrain the cashflow for banks, while at the same time, the “suspect collateral” out there will not have been improved to any material degree.

If so, the next step(s) could be a continued and expanding positive spread between the EFF and the IOER, followed by the most vulnerable banks and institutions being forced to go the Federal Reserve Discount Window, at which point fears about the health of the banking system will become front-and-center once again, and quite likely lead to at least a “healthy correction”, if not more, in especially the stock markets.