Most analysts like to talk a big game, but they aren’t actually profitable traders themselves – but rather marketers of things such as analyses, expensive trading programs, expensive online courses, and similar.

In this article, I take a look at my recent analysis performance and trading results, including the recent-most mini-crash. Most other analysts like to tell you about things after they happened, but our analysis service attempts to tell you beforehand what is most likely to occur in the financial markets – and while we’re not perfect, we’re very good and hard-working.

Now, I do sell my technical analyses through my two websites including this one, so I’m not free from also being labeled as a marketer, in addition to being a technical analyst and a trader. I have an expressive personality, and putting my analysis skills on the chopping block of the public arena has probably helped me develop even further than had I not done so.

I live in Sweden and 95%+ of my trades are on stocks listed on the NASDAQ OMX Stockholm Exchange or on index products linked to the Swedish blue-chip index OMXS30.

The screenshot below is from the Swedish social trading site Shareville.se (which is run by the online brokerage Nordnet.se of which I’m a customer), and it shows my account’s rolling 6-month equity curve. (BTW, Shareville has no demo accounts; the service only allows real accounts with real money from the brokerage Nordnet.) 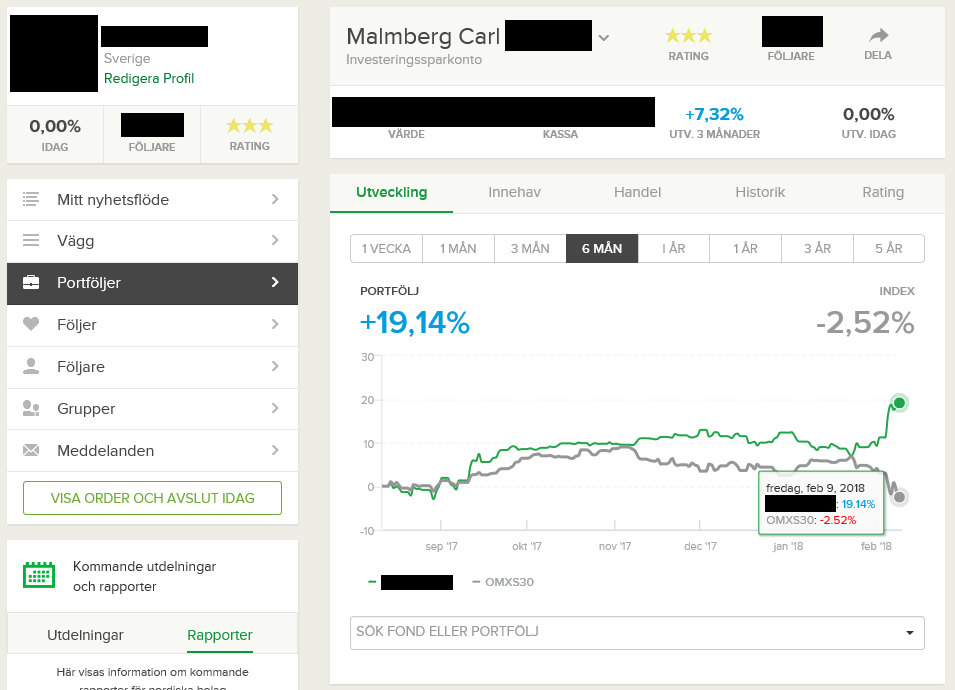 I’ve redacted my full name, my Shareville.se profile name and my account balance in SEK, as well as my amount of followers. The reasons for my redactions are that 1) I’m not comfortable sharing my exact portfolio size for privacy reasons (Sweden these days is infested with prying and envious people), and 2) I do not want other people to be able to find my profile easily on Shareville.se and follow my trades, because I don’t want to have what essentially becomes a front-running setup (because then I’ll be accused of “only running a front-running thing” and not having any real technical analysis and trading skills…).

As you can see, my portfolio at Nordnet (the brokerage which operates the Shareville social trading site from which I’ve taken the screenshot of my account), has outperformed the Swedish blue-chip index OMXS30 by +21.66% over the last 6 months. It has the highest 3-star rating at Shareville, which means it’s among the best 10% of portfolios on Shareville, which has 80000+ users currently.

An outperformance of +21,66% vs. the OMXS30 index and an actual gain of +19.14% over the last 6 months might not seem like much, but the Swedish stock market has been far weaker than the US stock market during the same period, creating several quite steep swings in both directions, which is not exactly an easy trading environment. But as you can see, I predicted and successfully traded this latest stock market mini-crash during the end of January and beginning of February 2018, making approximately +10% in a week during the crash.

If you subscribe to another analysis service already, can their analysts say the same thing about themselves, and prove it? Most probably, they can’t.

Other evidence that I was correct and profitable during the recent market turmoil.

Let’s say you’re really skeptical, and think I’ve stolen someone else equity curve and photoshopped a little… well, then you should go and read this article (link opens in new tab), which I wrote on the 11th of January, in which I accurately predicted the ongoing pattern in the US stock market, and that it would top out on maxed out indicators. Have a look: “This time it’s different – The global stock market bubble and its end.”

The pattern(s) discussed in the 2nd half of that article, have now been partially confirmed during the mini-crash, and I’m confident that I’ll be proven correct with that particular call and Elliot Wave model for the S&P 500.

There’s also the matter of the analyses published on OMXSPI, the main stock market index in Sweden.  On my Swedish analysis site, in a free technical analysis update written on the 25th of January, I said 574 was likely target for OMXSPI (2.5% below the current index level at the time~). And on the 2nd of February in another free Elliott Wave update, I selected 557 as my favoured scenario, which at the time was some 3.1% below the current market price, and which was far exceeded early on the 6th of February. So there we have me on the record calling for sustained downside, which occurred on both occassions, and was even somewhat overdone. (Run the articles through Google Translate if you don’t believe me.)

As for the S&P 500, here’s my analyses updates on it, published in the S&P 500 analysis section on this very website. Here’s a chart with the analysis comments leading up to the crash in the S&P 500 (full-size chart opens in new tab): 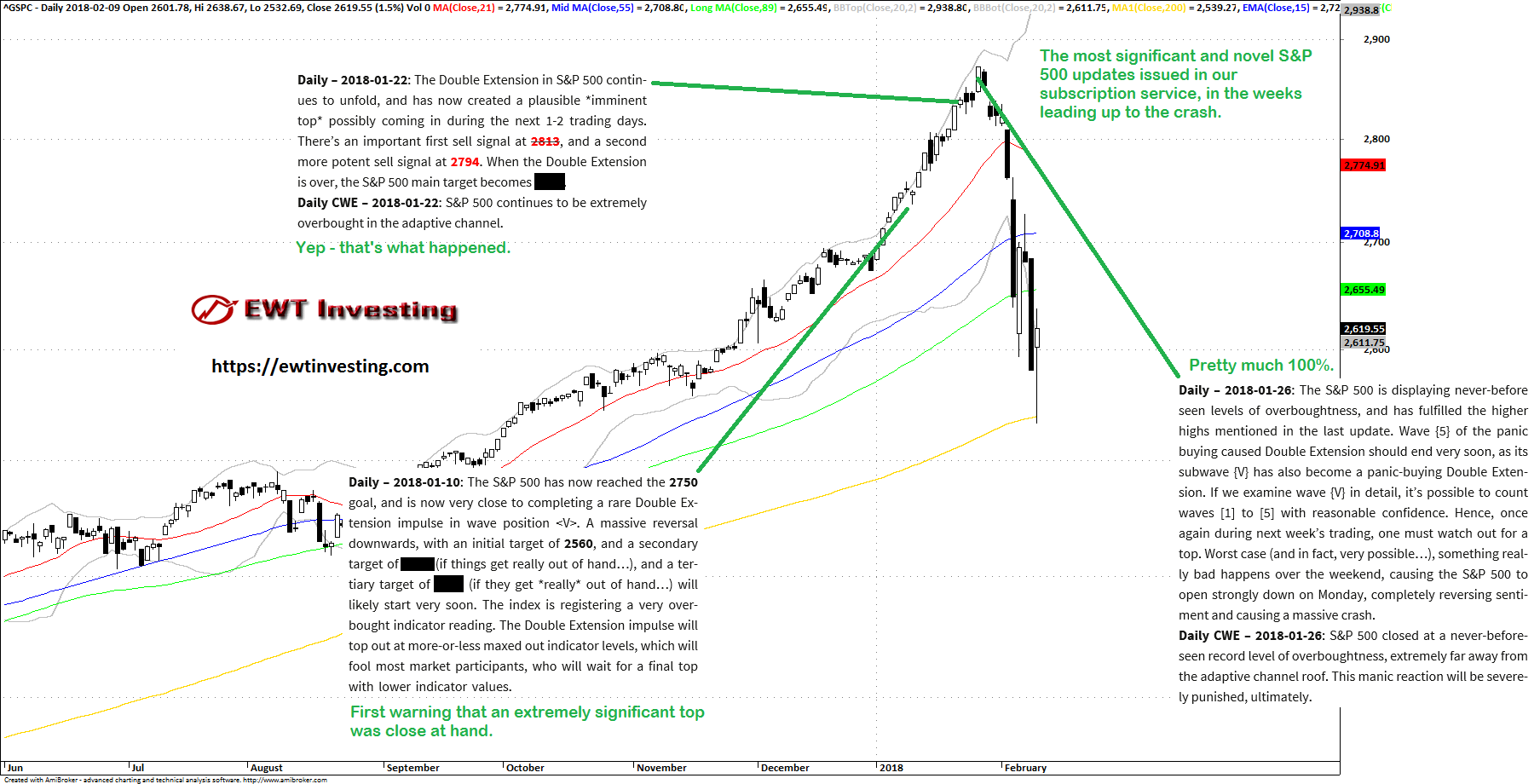 From the updates published on this website too, it’s pretty much clear that I had the right scenario (thus far at least). Even if you went short starting at my first warning on the 10th of January and you scale into positions like I do, you would’ve been in the money unless your negative positions were so highly leveraged they blew up during the final phase of the advance (which became a bit bigger than I expected, but that’s what Double Extensions do…).

This analysis service – EWT Investing – is one of very few run by actual market professionals and successful traders. At only $19 per month for continuous updates on 20 financial markets worldwide, you get far more value from my service than from the absolute majority of overpriced Elliott Wave services. You can sign up for a subscription to the Global Elliott Wave Coverage through this link. Be aware that I’ll accept a maximum of 1000 subscribers because I don’t want to decrease the efficiency of my Elliott Wave work.

Finally – let noone say “The crash wasn’t predictable” – the above text speaks for itself, that at least I got it very much right.