This follows on our previously established very successful chain of Gold/USD analyses – our previous analysis summary for Gold/USD was published in March 2017. There’s some overlap in this summary.

As usual, we’ve prepared charts with our analysis updates spliced in and chronologically clarified on a simple TA chart. Some of the analysis updates are slightly redacted for clarity and space preservation – and analysis updates that didn’t introduce anything new and only affirmed previous analysis conclusions, have been left out.

Here’s the first chart (click to open a full-size version in a new window): 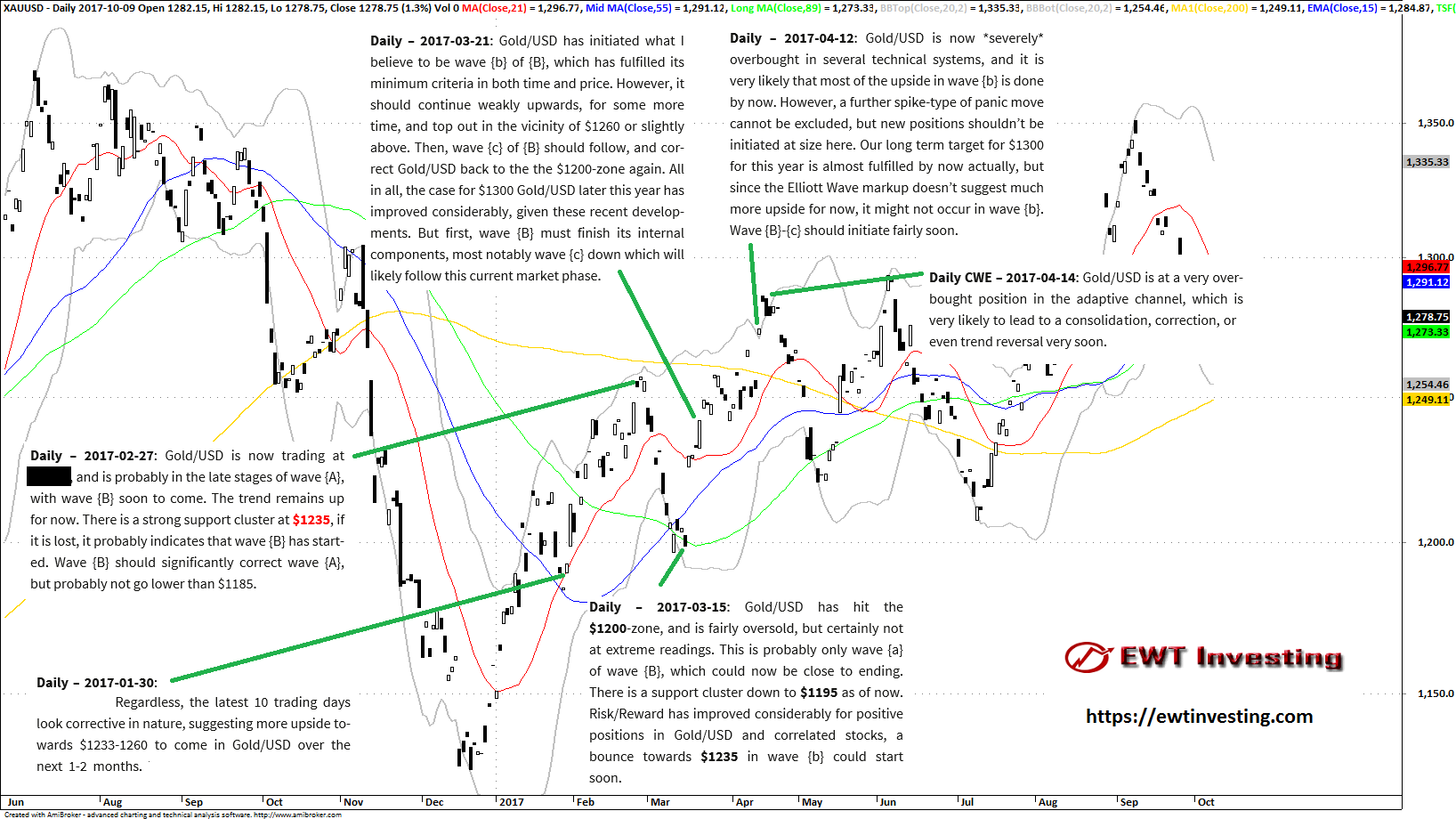 Then on the 21st of February in a technical analysis update, we noted that $1233 had been hit (a few days later, Gold also hit $1265 in the spot price…), and that a correction would likely start soon, with $1235 as a sell signal. Gold then proceeded to slice through $1235 and continue towards $1200.

On the 15th of March, our analysis suggested that Risk/Reward for positive positions in Gold and gold miners had improved considerably, and that a move towards $1235 would start soon. $1235 was then hit just a few days later.

On the 12th of April, our analysis work warned that Gold was severely overbought and that a correction would soon ensue. This warning was reinforced on the 14th of April, when we once again pointed out that Gold was severely overbought in one of our indicator systems, adding to the high short-term risk. Gold soon turned down in a significant correction, once again proving our analysis correct.

Let’s have a look at the next chart (click to open a full-size version in a new window): 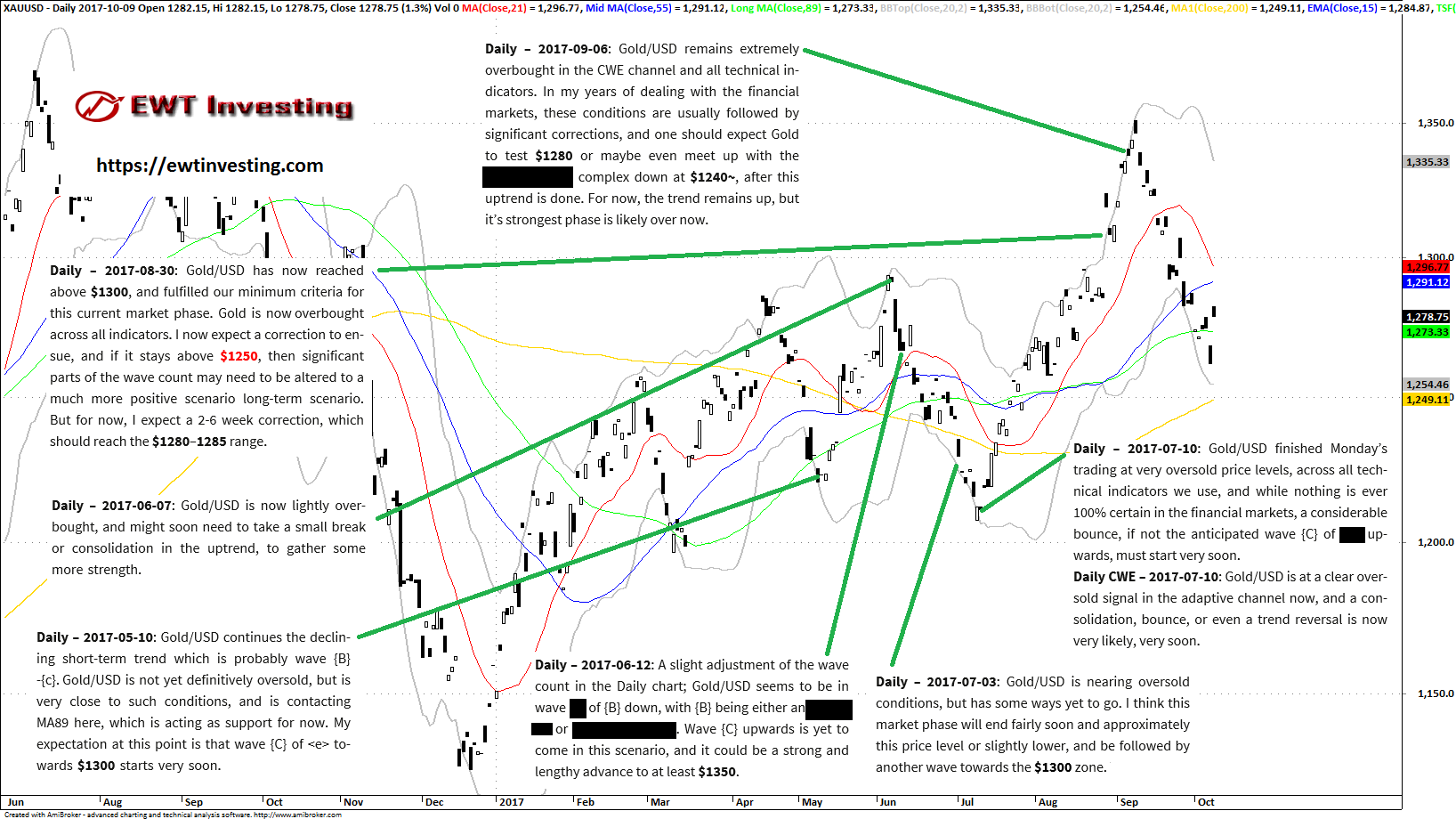 On the 10th of May, we pointed out that Gold was hitting support, and that a new wave towards $1300 would start soon. Again we were proven correct soon thereafter, because Gold was at a bottom, and then trended up strongly.

On the 7th of June, we warned that Gold was overbought after its recent rally, and that a correction of some sort would soon be needed. Again, a correction started the next day. However, to be fair, at the time, we didn’t expect it to be as deep as it ultimately became.

On the 12th of June, we introduced a slight adjustment to our Elliott Wave model, which specified the current decline to only be a correction, and that $1350 would be hit later. Our Elliott Wave analysis turned out to be correct yet again, as in September 2017, Gold hit $1350, but we still didn’t have a full grip on exactly where the current correction would end.

On the 3rd of July, we pointed out that Gold was nearing oversold conditions, and that the current market phase would soon end, and that Gold would then advance to $1300. This was yet another very successful market call on our part.

On the 10th of July, we were adamant that Gold had hit oversold enough levels, which taken together with our Elliott Wave Theory work, implied a near 100% chance that wave {C} (targeting $1300+) would start soon. Yet again, we were proven correct, as Gold started a monster rally shortly thereafter.

On the 30th of August, Gold had hit very overbought levels, and our work suggested a multi-week correction towards $1280 to ensue. We were a bit early with this call, in hindsight.

On the 6th of September, we warned that Gold was so significantly overbought a strong correction would have to follow, and once again the $1280 target was repeated as a likely target for a correction. This proved to be a correct analysis take, as Gold hit $1280 in early October.

EWT Investing has been very successful and accurate at analyzing Gold (in USD terms) for a long time now. The time period covered in this analysis summary is certainly not different, in fact, our analysis work has been very accurate in this time period.

We don’t believe you can find better Gold analysis  anywhere else, than through our Global Elliott Wave Coverage subscription service. If you trade Gold in any capacity, you ought to sign up for a subscription slot now.