Let’s have a look at our mostly very accurate Elliott Wave Theory analysis of the US Dollar Index (USDX, DX #F) during H2 2016 (and parts of January 2017), which we analyze 1-2 times per week for our subscribers. Trading the US Dollar Index can be done through futures on the ICE, or ETF’s.

Let’s get into it, and start with the usual summary chart with comments spliced in. Please click the chart to open a full-size version. 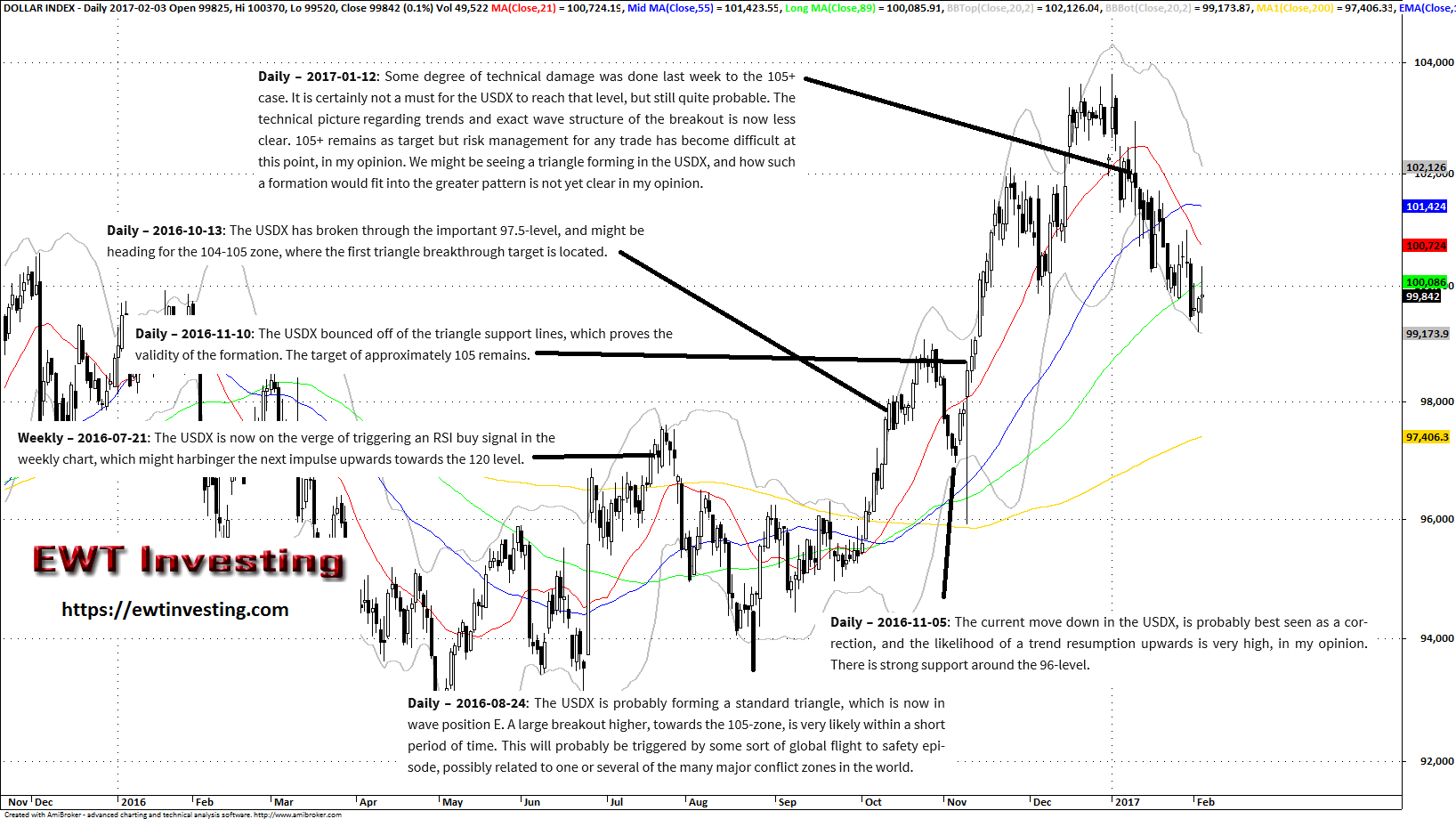 During the summer of 2016, in the weekly chart, except for pattern recognition, our RSI-based technical indicator used in our weekly charts, began shifting to a buy signal, as was made clear to our readers on 2016-07-21.

In late August, on the 24th, the pattern strongly suggested that a move towards the 105-level was in the works for the US Dollar Index, and we speculated that the move could be triggered by a geopolitical crisis. Thankfully, nothing of that sort happened, but the technical pattern held true nonetheless, and the US Dollar Index began moving higher.

In October, an important confirmation level was taken out, which further increased the probability that 104-105 was the target for the current wave pattern.

On the 5th of November 2016, we called the short-term trend a temporary phenomenon, suggesting that the market was very likely to move higher. We also named 96 as strong support, and indeed, on the US Presidential Election night, when the USDX flashcrashed, the support at 96 held, and the USDX rocketed higher, as we in short terms commented on the 10th of November.

From there, the US Dollar Index went on to almost hit the 104-level. In the continuous futures contracts we analyze, it hit 103.8.

Unfortunately, we didn’t nail the top, expecting slightly higher highs to be made. But on the 12th of January 2017, we issued a statement that while the 105-goal wasn’t yet off the table, risk management and predictability had dropped (i.e. making the trade less safe to keep on the books, at least in full-size).

We have made analysis updates post-the-12th-of-January, of course but they are not included in this summary (we save them for the next one).

Potential profits from our US Dollar Index analyses?

There are two ways to look at it, one is generous to us and assumes the best entry and exit points, and one is stricter, harsher. Let’s use the ETF DB US Dollar Index Bullish Powershares, ticker UUF, which is a popular trading vehicle for the US Dollar Index.

If we assume an entry based on our July comments, and still holding the UUP position until today, that would be an entry at $25.08, with the current UUP price at $25.78. A much smaller gain of +2.79% (annualized gain of +5.15%). A liqudiation as soon as the markets open on Monday the 6th, would still bring profits (barring disastrous overnight events).

Of course, there are countless variations in between these two outcomes. The fact remains, we caught most of the large upmove from sub-95, and alerted our readers in time to the support level at 96, which held during the US Election flash crash spectacle. We also warned shortly after the current market cycle top, that pattern clarity had dropped and risks increased, which is fair warning to reduce or outright sell and lock in profits.

All in all, we hope that our subscribers have found them profitable. While we cannot know the future market moves in advance, we will continue to do our very best to try and find opportunities and risks in the financial markets.