Since July 2016, the US Treasury yields (i.e. interest rates) have been steadily climbing, with the trend gaining considerable short-term strength after the election of Donald J. Trump as the 45th US President.

While the immediate market reaction is ascribed to several factors, including market participants expecting a pickup in inflation, as well as increased profits for banks (due to a presumed steepening of the yield curve), these factors are only part of the explanation.

The latest liqudiation wave started in the evening of November the 8th (US timezones), when it started to become clear that Donald Trump was winning the Electoral Vote.

Here’s what happened in the US Treasury futures (click to open a larger chart):

At the same time, this happened in the USD/CNH (US Dollar / Chineses Renmibi Yuan) pair (click to open a full size version):

The USD/CNH rose simultaneously, indicating Yuan weakness versus the US Dollar. It is not at all far fetched to ascribe this market action to China liquidating a portion of their US Treasuries and keeping the USD they get for them, which if done through a bank in, for instance, Hong Kong, would also explain the move downwards in Yuan (China orders the 3rd party bank to liquidate US Treasuries on its behalf, and gives the 3rd party bank Yuan in exchange for the USD cash balance arising from the UST liquidation).

Part of this might be explained by the Chinese economic situation, which we admittedly know very little of. Maybe they have a need for some USD cash reserves right now? But part of the reason for the proposed Chinese UST sell-off, might be because Mr. Trump has hinted at “haircutting” (defaulting or partially defaulting) US bonds that other nations hold, if they continue with what the President-Elect has branded “unfair trade practices”. It seems that the Chinese and possibly other actors as well, might have decided to get reduce their risk of losses, by simply liquidating US Treasuries, and holding USD cash reserves instead, which are far less likely to be haircut in any way.

Once such a major liquidation trend is under way, it of course influences the P/L of other bond holders, forcing them to reassess their holdings, and potentially leading to stoplosses being triggered.

This destroys the meme of the latest decade, that government bonds are basically “risk-free”, “senior secured debt”, and whatnot.

To conclude this week’s blog post, let’s have a look at the 13-week, 5-year, 10-year and 30-year US Treasury yields. First out is the 13-week yield (click to open full size chart): 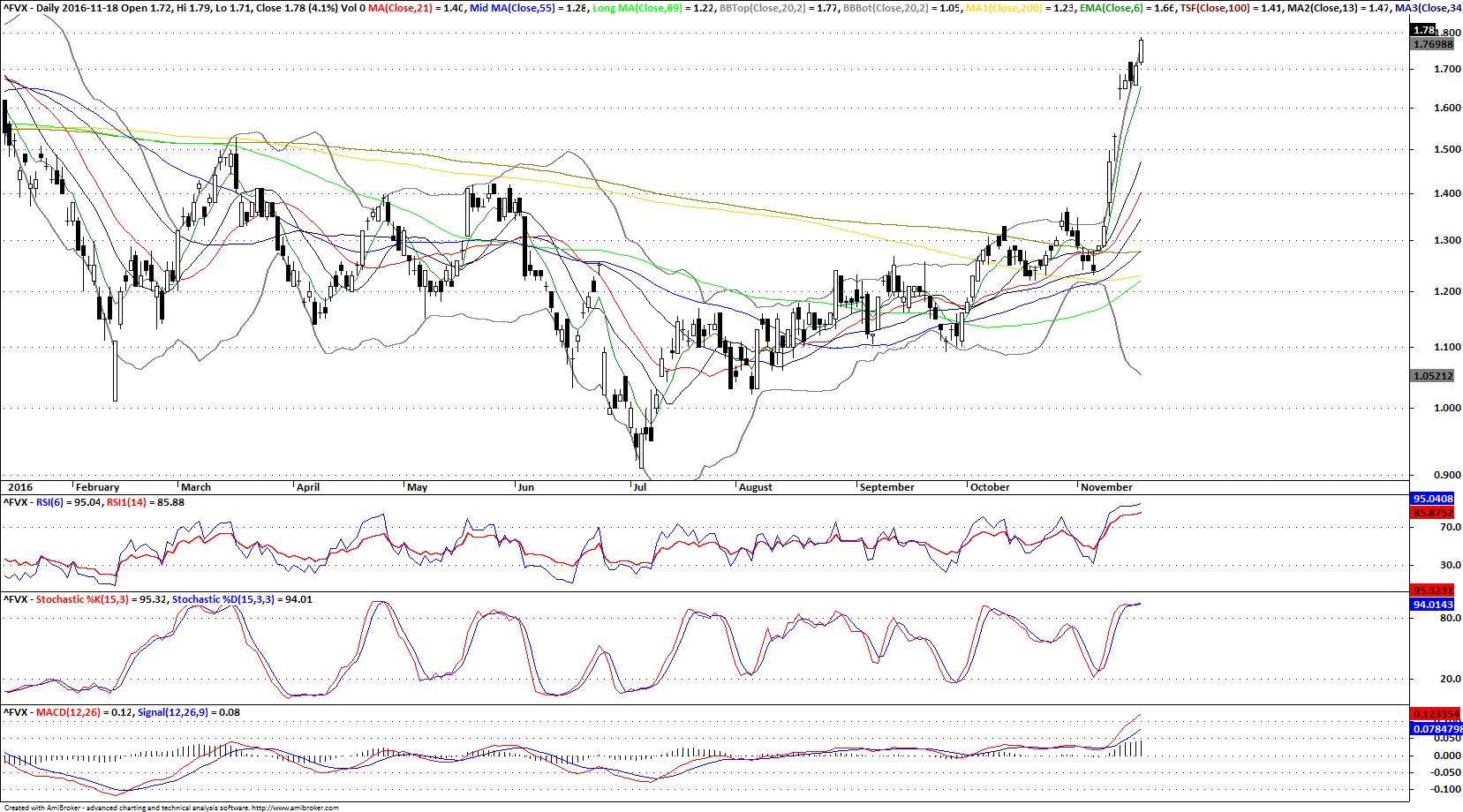 As can be seen, the violent uptrend in the 5-year US Treasury yield continues almost unabated, despite having reached severely overbought (oversold in the underlying bond, that is) conditions. The MA200/MA233 has been left far behind. Let’s have a look at the 10-year next (click to open a full size chart): 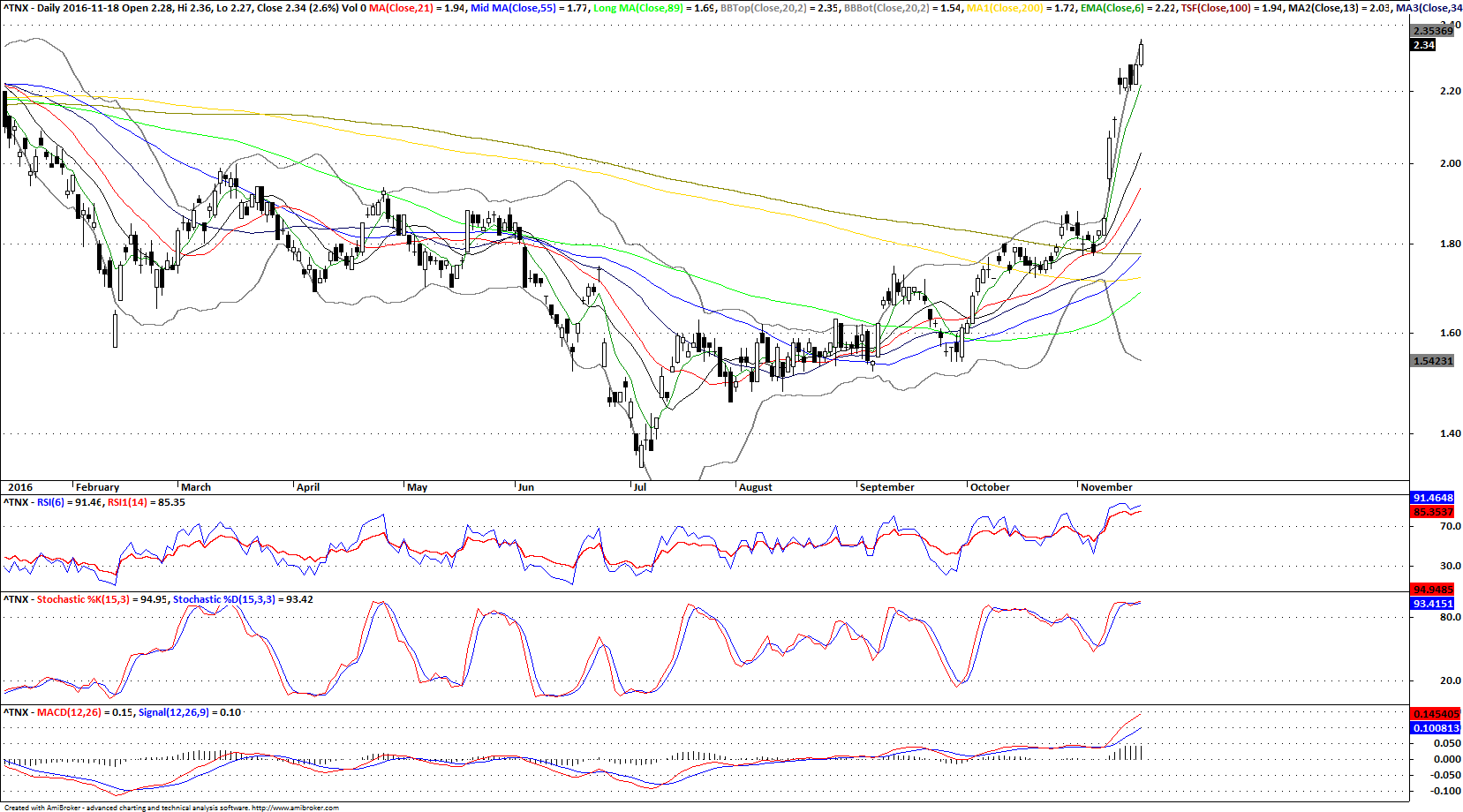 As we see in the above chart, the liquidations of the 10-Year US Treasury Note continue for now, causing a severely overbought situation in the corresponding interest rate chart (shown just above). As for the last chart this time around, let’s check out the 30-Year UST yield below (click to open full size chart): 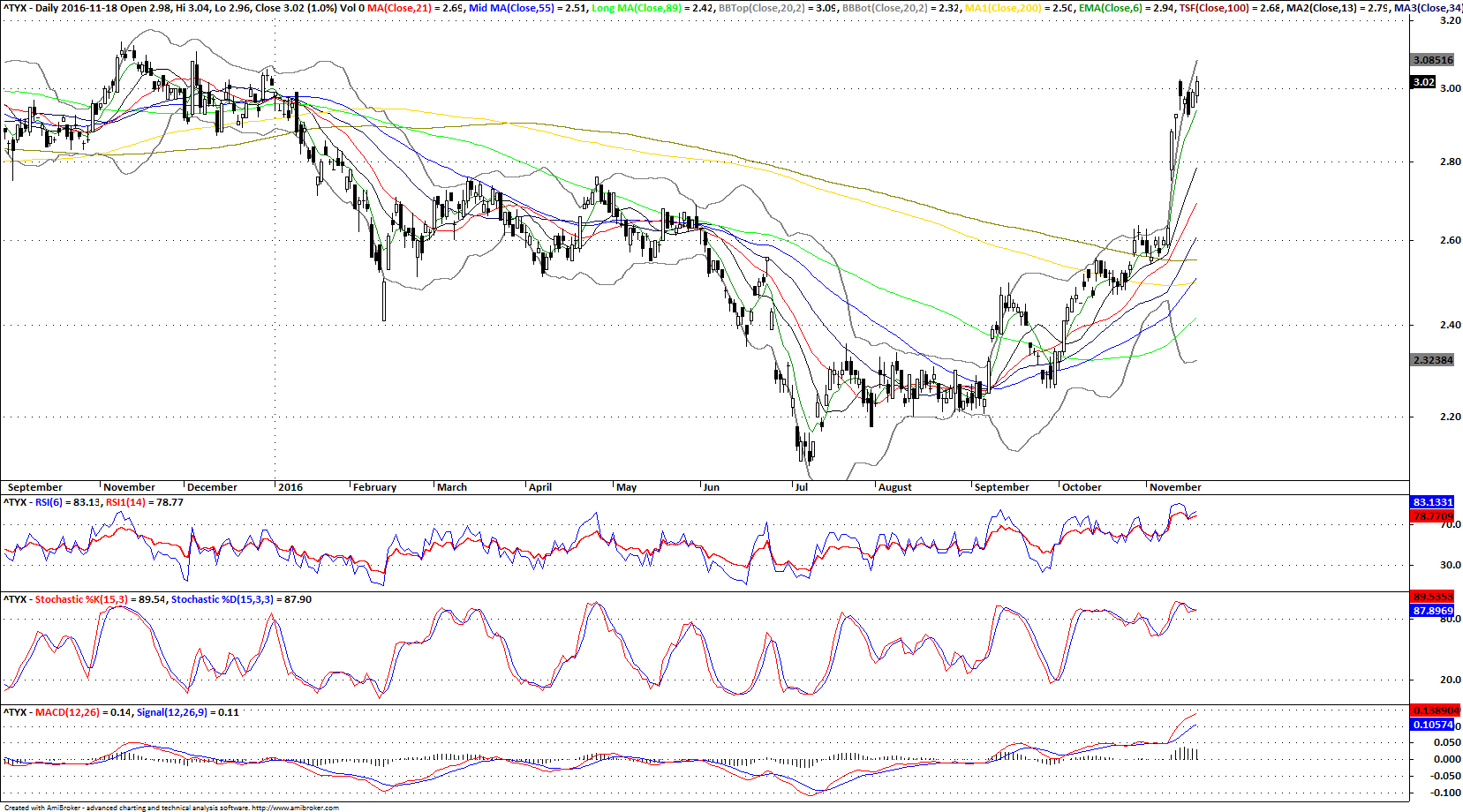 They’ve also been surging. The entire interest rate complex, have been rising since July 2016.

The same is true for yields across the entire European continent as well as most emerging markets, and Japan.

For now, this is heralded as profitable for banks, the justification put forth is that a steeper yield curve increases bank profits. However, all US consumer credit is indexed off of the US 10- and 30-year interest rates. The sharp increases in mortgage rates, have already reduced the demand for US housing. More pain is likely to come.

Furthermore, the Federal Reserve cannot control the yield curves. In the US alone, the amount of outstanding credits have risen from approximately $53 trillion at the bottom of the 2008-2009 financial crisis, until above $80+ trillion today. Of these trillions of dollars, the Federal Reserve have only gobbled up around $4-5 trillion. Where will the price of oil go, if they try to pick up another $5 trillion?

The S&P500 now yields less in dividends on average, than the US 10-year Treasuries do. Furthermore, most US corporations have spent their cash on unproductive stock buybacks and dividend payouts, while the P/E is at a record 25~ish. After the cash balance was mostly spent, the corporations turned to the bond markets, issued bonds at record-low interest rates, and spent the cash on more stock buybacks and dividend payouts.

If the 35-year long trend in interest rates has now come to an end as of July 2016, what will happen to the valuations of these companies when they have to roll that debt on higher interest rates? The profits will decrease, the room for dividends will decrease, and so the share prices are likely to come under severe pressure.

Suffice it to say, Donald Trump has inherited a terrible legacy from Obama who more than doubled the US national debt to $20 trillion during his 8-year tenure, as well as from the US corporate sector (and indeed the consumers too), who have all grossly overlevered themselves with debt at record-low interest rates, foolishly believing they were here to stay forever. What if they are not?

(Subscribers to our services have access to our analysis of the 10-year US Treasury Note, updated once per week.)